Note to Self When Setting up 2GB NVIDIA Jetson Nano: Ditch the Network Connection During Setup

During this Presidents Day weekend, I received a 2GB NVIDIA Jetson Nano that I purchased online from Micro Center about a week ago.  At the time of purchase, it was on sale for $49, but as of this time of writing it has reverted to its list price of $59.  I needed a CUDA-capable GPU for a side project I'm working on, but due to the ongoing inflation in GPU prices due to the effects of COVID-19, I figured that purchasing a Jetson Nano would be my best option for now.  Besides, if I need more horsepower than what the Jetson Nano provides, I could always rent a GPU instance from Amazon. 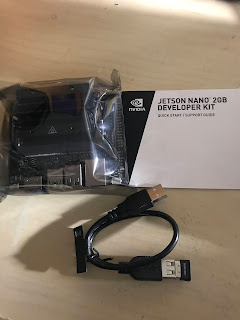 I followed the installation instructions from NVIDIA's official guide.  However, after installation, I found that I couldn't boot my Jetson Nano after shutting it down.  I ended up having to re-image my SD card.  The next time around, however, I decided to leave the included WiFi adapter disconnected from the Jetson Nano instead of having it connected during my first installation.  By doing this, I was able to restart from a cold shutdown without any problems.  I later connected my WiFi adapter, and my Jetson Nano works properly, whether the WiFi adapter is connected at power-up or after power-up.

So, the summary is this: when you initially set up your 2GB NVIDIA Jetson Nano, do not connect it to the network until after it is set up.

Posted by Michael McThrow at 12:44 PM